Substitution amoung Labor, Capital and Energy for United States Manufacturers 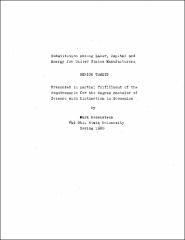 A three input translog cost function in labor, capital and energy was estimated for 298 U.S. manufacturing industries for the years 1972 and 1976. A statistically significant change in the function was observed between these years indicating a change in technology occurred. The Allen Partial elasticity of substitutions for the inputs were calculated and the substitution possibilities between labor and energy and capital and energy had become easier. These calculations were repeated for subgroups of industries divided by fuel cost share, and for industries with 1% to 3% fuel cost share similar results occurred. For other subgroups, no change in technology was observed, and no pattern was apparent in the elasticities.