Political Motivations for Variance in Eligibility and State Spending on Medicaid 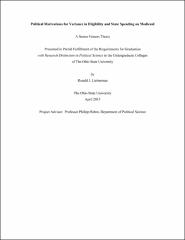 Medicaid is one of the largest portions of US social welfare, costing the states’ and federal government $389 billion in 2010 and offering coverage to 20% of the entire US population. Yet, it remains a poorly understood institution, despite the wealth of social welfare research done in the US. Previous work has focused primarily on the influence of per capita incomes and other economic indicators on the strength of the Medicaid programs, neglecting many alternative perspectives. Within in this essay, I propose a new way of looking at Medicaid, disregarding the role of money and instead focusing on the role of votes, elections, and ideology. Politicians control Medicaid and one of politicians’ most pressing concerns is reelection. If we instead view Medicaid as a borderline populist tool for winning votes, we can add to our understanding. By examining how much competition for election politicians face and how liberal or conservative they are, this essay attempts to offer new explanations for Medicaid outcomes. I found that this perspective gives us a new general predictor of what the strength of a state’s Medicaid program will be.