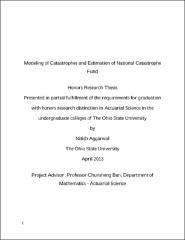 Bill 'H.R. 2555: Homeowners' Defense Act of 2010' was considered by the United States of America (US) Congress to form National Catastrophe Risk Consortium. The bill was introduced on April 27, 2010, but was not enacted. One of the functions of the consortium was to fund a National Catastrophe Fund to help public and insurance companies meet the liability claims from hurricane, fire, and blizzard. The bill has to pass through House Financial Services Committee which takes into account the projected costs, disbursements, and the amount required to be appropriated for the task and its source. In this project the following are accomplished: Part I: Modeling • Employed the method of Maximum Likelihood Estimation (MLE) to estimate the parameters such as mean of count of fires, hurricanes and blizzards. • Modeled the number of acres burnt by fires by Weibull distribution. • Modeled the economic damages caused by blizzards by Poisson Distribution. • Employed Poisson distribution to model the number of hurricanes occurring in each hurricane category. Part II: Estimating • Estimated 2013 claims for hurricane, fire, and blizzard in United States of America using data for three catastrophes for the last 100 years. • Carried out Linear regression analysis to compare the results of the new model for acres burnt from fires and economic damage from blizzards. • Predicted the economic damages from the three disasters in 2013 to be 46.7 billion dollars. • The National Catastrophe Fund for the liabilities of fire, blizzard, and hurricane needs to be funded by 10% of the estimated economic damages which for 2013 amounts to 4.67 billion dollars.