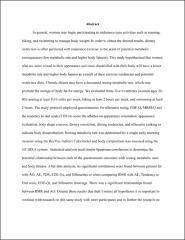 In general, women may begin participating in endurance type activities such as running, biking, and swimming to manage body weight. In order to obtain the desired results, dietary restriction is often partnered with endurance exercise to the point of potential metabolic consequences (low metabolic rate and higher body fatness). This study hypothesized that women who are more vested in their appearance and more dissatisfied with their body will have a lower metabolic rate and higher body fatness as a result of their exercise tendencies and potential restrictive diets. Chronic dieters may have a decreased resting metabolic rate, which may promote the storage of body fat for energy. We evaluated thirty-five tri-athletes (women ages 20-40) running at least 8-10 miles per week, biking at least 2 hours per week, and swimming at least 2 hours. The study protocol employed questionnaires for silhouette rating, EDE-Q, MBSRQ and the tendency to diet scale (TDS) to score the athletes on appearance orientation, appearance evaluation, body shape concern, dietary restriction, dieting tendencies, and silhouette ranking to indicate body dissatisfaction. Resting metabolic rate was determined by a single early morning measure using the ReeVue Indirect Calorimeter and body composition was assessed using the GE iDXA system. Statistical analysis used simple Spearman correlations to determine the potential relationship between each of the questionnaire outcomes with resting metabolic rates and body fatness. After data analysis, no significant correlations were found between percent fat with AO, AE, TDS, EDE-Qs, and Silhouettes or when comparing RMR with AE, Tendency to Diet scale, EDE-Qs, and Silhouette drawings. There was a significant relationships found between RMR and AO. Despite these results that didn’t mimic all hypotheses it is important to continue with research on this same study with more participants and to further the research on female athletes in order to educate women on their bodies and how to properly nourish them for sport and activity.