Contraception Use among African American and Caucasian College Students 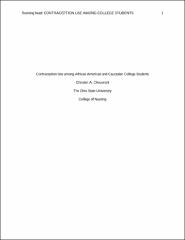 Unintended pregnancies, totaling nearly 3 million each year in the U.S., are associated with increased health risks for both the mother and baby. Former research has shown women of racial minorities are at disproportionally higher risks for unintended pregnancy as a result of less effective contraceptive behaviors. This study aimed to explore the differences in contraceptive behaviors amongst racial subgroups. The purpose of this secondary analysis was to analyze women’s contraceptive choices and determine if there are differences between those of African American and Caucasian women. Women (N = 196; 32% African American) ages 18 – 30 years were recruited for the parent study from a large Midwestern university through internet newsletters. Interested women contacted the PI (second author) who explained the purposes of the study. Those interested were given a secure, on-line link in which to complete informed consent and fill out the study questionnaires. For this analysis a survey using closed- and open-ended questions asking about contraceptive practices was implemented. Data were analyzed with descriptive statistics and chi-square tests. Findings indicated oral contraceptives, condoms, the morning after pill, and withdrawal were the most used by women as contraceptive methods. Additionally, the study revealed oral contraceptives use was significantly more likely by Caucasian women. Although there was not a significant relationship in this sample, results showed African American women reported using the NuvaRing® or no method more than Caucasian women. This information identifies disparities within contraceptive use and helps guide research and practice in discerning underlying mechanisms in contraceptive behaviors.