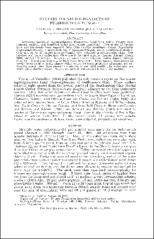 Seventeen species of saprolegniaceous filamentous fungi from Athens County were isolated, studied, and identified under pure culture conditions. Five of the 17 species have not previously been reported from Ohio (Achlya caroliniana Coker, Saprolegnia kauffmaniana Pieters, S. mixta de Barry, S. hypogyna Pringsh., and S. moniiifera de Barry). Only five of the 17 species have previously been collected in southeastern Ohio. One hundred and twenty collections (15 a month for eight months—August through March 1968) yielded 113 isolates. Seventy-two percent were collected during August through October. Saprolegnia ferax was isolated most frequently. Most species, when grown on sterile hemp seeds in sterile glass-distilled water, initiated production of oogonia and antheridia sooner than those grown in a mixture of one third sterile lake water and two thirds glass-distilled water. Vegetative growth was greater in the latter medium.