The Tobiads and the Maccabees: Hellenism and Power in the Ancient Judean Community 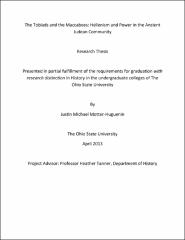 "The Tobiads and the Maccabees: Hellenism and Power in the Ancient Judean Community" takes a look at the events leading up to the Maccabean revolt and argues that the revolt must be considered as part of a larger struggle within the Judean elite for control that had been going for quite some time. Rather than considering the Maccabean revolt as a purely religious war against Seleucid oppressors, it must be recognized that much of the conflict was in fact a civil war within Judea itself, and was driven by politics as well as religion.