Impact of Sexual History on Perceptions of Men and Women 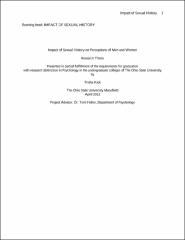 These two studies incorporated a different approach to researching the sexual double standard through the use of a video medium. The participants in the first study consisted of 98 General Psychology students ages 18-25; 52 men and 54 women. The second study had 190 General Psychology students ages 18-25; 80 men and 110 women. Participants watched one of four possible videos in which the interviewee revealed different levels of sexual activity. Afterwards they were given a sentence fragment completion task to test for priming effects from the videos and were asked to complete measures to evaluate the interviewee and views of individuals’ personal characters. In the second study the participants were also asked to complete a list experiment task. The goal of both studies was to determine whether the traditional sexual double standard is prominent in today’s young adults and if it affects how they view others. While these two studies were unable to find evidence in support of the double standard, researchers are still finding mixed results. It is hoped that these new methodologies can eventually aid in the study of the double standard.