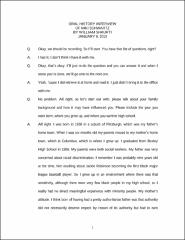 Family and personal life
Experience with racial discrimination
Experiences at OSU, including involvement with College of Arts Student Council and Student Senate
Combatting off-campus housing discrimination
Speakers Rule and lawsuit to abolish it
Involvement in in loco parentis issue and its influence on loss in student-body presidential race
Influence of OSU faculty and change to a political science major
Decision to attend law school
Post-graduate effects of involvement in student activism
Law-school teaching and subsequent law firm employment
Involvement in lawsuits against Marion Correctional Institution and Ohio State Reformatory in Mansfield
Involvement in ending riot at Southern Ohio Correctional Facility
Involvement with OSU since graduation
Reflection on effects that his student activism had on the University

The interview discusses OSU alumnus Niki Schwartz's experiences with political issues as an undergraduate, then law-school student, on the OSU campus in the late 1950s and early 1960s. His experiences include work to combat racial discrimination in off-campus housing and involvement with the College of Arts Student Council, which influenced his him to later run for president of Student Council and student-body present. His participation in efforts to reform campus policies on student rights, including the abolishment of the Speakers Rule, and influences of certain professors helped him to switch from majoring in journalism to political science in his undergraduate career. He then continued on to law school. After graduating from law school, his efforts to find a job with the U.S. Department of Justice were thwarted by negative references from campus administrators who had been unhappy with his political activism while he was an undergraduate and in law school. Shortly after, Schwartz began teaching in the University of Toledo's College of Law, then practicing at various law firms. His memorable experiences when practicing law include advocating for prisoners' rights, both at the Marion Correctional Institution and at the Ohio State Reformatory in Mansfield. In 1993, he successfully resolved the riot and stand-off at the Southern Ohio Correctional Facility at Lucasville. More recently, he has been involved with OSU educational efforts, particularly in the Department of History, where he helped established a fund to promote effective teaching. In 2004, he was honored by the Moritz College of Law. He continues to return to campus for football games, hosting tailgates with the history department.