Effects of a preadoption pamphlet on the success of canine adoption 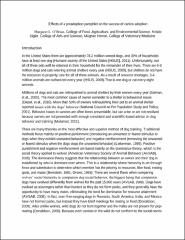 In the United States, millions of dogs are relinquished to shelters by their owners every year, often due to behavioral issues. Although considerable research has been conducted on the effects of various types of training on a dog’s behavior, much of the population still uses ineffective and dangerous forms of training- most commonly, dominance based training. These outdated methods can lead to behavioral problems and subsequently, the relinquishment and possible euthanasia of the dog. The goal of this research is to determine the effects of a pamphlet that emphasizes the importance of training dogs with positive reinforcement. During my study, I asked owners adopting a dog from the Franklin County Dog Shelter to participate in the study by completing an online survey about their dog three months after adoption. A randomized control group did not receive the pamphlet, and a randomized treatment group did receive the pamphlet. After the data was analyzed, it was found that the pamphlet did not have a significant effect on the type of methods owners used to train their dogs. It is essential to continue research to find a way to educate the public on the proper way to train dogs in order to help combat dog relinquishment to shelters and to increase owners’ satisfaction with their pets.