College Student Social Media Use and Its Relation to Health Behaviors 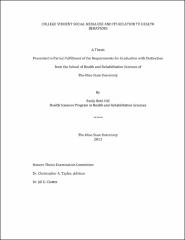 It is well known that dietary and activity patterns of college students can affect their health. Technology, including social media, has the ability to impact these lifestyle behaviors and aid users in making decisions regarding various health beliefs and activities. Social media could establish an educational and supportive system to help college students work toward goals for healthy living. To examine the relationship between social media use and college student lifestyle behaviors, we collected a cross-sectional survey of students at a large Midwestern university. An email invitation was sent to 847 students asking them to complete an online survey to measure student health perception, lifestyle behaviors, and social media use. Of the students invited, 288 began the survey, and 268 completed it. Subjective normative data about perceived healthfulness of the students' diets, levels of physical activity, and overall health status when compared to their peers was addressed using a Likert-type scale. Physical activity data was quantified as the frequency and duration of moderate, vigorous, and sedentary activity. Students were also asked to evaluate their use of various social media sites for health-related purposes. Differences in lifestyle behaviors were compared across social media users via descriptive statistical analyses. The most commonly used social media were Facebook (97% of survey respondents), YouTube (90%), Pinterest (56%), and Twitter (51%). Students posted most about their food and physical activity habits on Pinterest and Facebook. A greater proportion of social media use for posting about lifestyle behaviors was reported for their peers than for the students themselves. Dietary patterns were similar for those who posted about their food habits compared to those who did not. Social media is commonly used by college students to post about health-related behaviors, so this could be a useful tool for health education and promotion efforts.