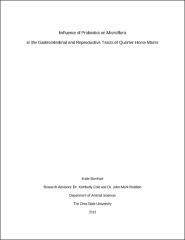 Current scientific literature is limited on what microorganisms are present in the equine gastrointestinal and reproductive tracts. Microbial populations in these environments can be easily disrupted and probiotics have been utilized in other species to re-establish homeostasis and inhibit the growth of pathogenic bacteria. The objective of this study was to determine whether probiotics could influence the microflora in the gastrointestinal and reproductive tracts of mature horses. Seven Quarter Horse mares (10 ± 2 yrs of age) were randomly assigned to 1 of 2 treatment groups (probiotic or control) for a period of 56 days. All horses received 0.5% BW of a 12% CP pelleted concentrate, with water and mixed grass hay ad libitum. Horses in the probiotic treatment group were fed a supplement containing L. acidophilus at a target dose of 109 cfu/45 kg of BW per day. Fecal samples and vaginal swabs were collected weekly to measure pH and evaluate changes in microflora. Uterine swabs were collected when possible during periods of estrus. Mean pH values were analyzed using the PROC MIXED procedure of SAS. A P value of ≤ 0.05 was considered statistically significant. There were no changes in fecal, vaginal or uterine pH due to probiotic supplementation. Microbial diversity was investigated using PCR with universal primers specific to 16S rRNA gene sequences and subsequent denaturing gradient gel electrophoresis (DGGE) analyses. Images were captured and analyzed with Bionumerics software to compare microbial diversity. PCR using universal primers was successful in amplifying the 200 bp region of interest in all samples. DGGE analysis of fecal and vaginal samples revealed that the control horses had a more diverse microflora compared to the horses given the probiotic. However, DGGE analysis of uterine samples revealed no differences in microbial populations due to the probiotic. The ability of a probiotic to colonize the host may be species and/or environment specific. Further analysis with Lactobacillus specific primers is needed to determine the influence of the probiotic on microbial diversity within the gastrointestinal and reproductive tracts.