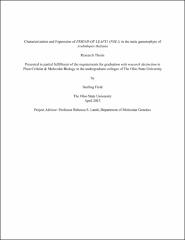 The need of plants for sexual reproduction and the resulting recombination of parental genes is fundamental and important for adapting to their environment. Sexual reproduction in angiosperms relies on the male (pollen) and female (embryo sac) haploid gametophytes, which are produced in the pollen sacs and ovule, respectively. A disrupted gametophyte prevents proper reproduction and poses a serious threat to the survival of the species. FRIEND OF LEAFY1 (FOL1) is a C2H2 zinc-ﬁnger transcription factor that is expressed in developing pollen and embryo sacs. FOL1 loss of function mutations cannot be recovered as homozygous due to pollen lethality. Expression analysis has shown that FOL1 is expressed early in pollen development; speciﬁcally in the tetrad and early microspore stages. Through the application of Alexander staining a quantiﬁable amount of viable and inviable pollen will determine the expressivity of lethality caused by fol1-2. In addition, examination of pollen development in fol1-2 heterozygotes will be conducted. To overcome gametophytic lethality, complementation with a chimeric construct expressing FOL1 only during pollen development will allow generation of homozygous mutant sporophytes and the ability to study FOL1 function in diploid tissues.