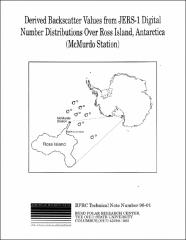 This report examines the derived backscatter values for different physical properties from one JERS-1 image over Hut Point Peninsula on Ross Island in the McMurdo Station area. The results discussed in this report will be used to determine a suitable location for transponder testing for the Radarsat Antarctic Mapping Project. Histograms of digital number (DN) values (0-255) were created to determine the DN distribution and approximate backscatter value for five locations on a single JERS-1 image. Two locations were chosen over first year sea ice, and one location each over glacial ice, exposed rock, and the McMurdo Station. From published backscatter values for first year ice of -15dB and a DN of 40, estimated from histograms, an approximation of the calibration constant K was calculated and subsequent backscatter coefficients were computed for the remaining locations. Digital numbers peaked at 255 for both glacial ice and McMurdo Station indicating that an area outside of McMurdo Station would be preferable for transponder testing.