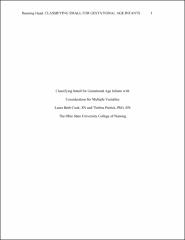 According to the theory of prenatal programming, small for gestational age (SGA) infants are at an increased risk for adverse health conditions later in life, including diabetes, obesity, and cardiovascular disease. Proper identification of these at-risk infants is necessary in order to monitor, prevent, and manage these risk conditions throughout the lifespan. Infant birth weight is categorized as SGA (less than the 10th percentile), appropriate for gestational age (AGA, 10th to 90th percentile), and large for gestational age (LGA, above the 90th percentile) on standard growth charts. However, growth charts differ in the factors that are considered for classification. Some charts use weight alone, while others consider such factors as gender and gestational age.. The purpose of this study is to determine if the method of reporting infant birth weight affects the rate of identification of SGA infants. This study is a retrospective, descriptive study using data that were collected from participants in a randomized trial entitled “Exercise Intervention to Reduce Recurrent Preeclampsia” (R01 NR05275). The study sample was composed of 120 subjects. Mean infant GA at birth was 38 weeks with a standard deviation (SD) of 2.3 weeks. Mean infant weight was 3,391.5 grams, with an SD of 612.8 grams. Fifty-three percent of infants were male while forty-seven percent were female. Infants were classified using three different methods: weight expressed in grams, weight expressed in grams with consideration for GA, and weight expressed in grams with consideration for GA and gender. Rates of SGA, AGA, and LGA infant identification were compared and found to differ significantly across the three methods, confirmed by a chi-square analysis (F4,90=26.49), with a p-value of less than 0.0001.. The importance of correct classification of SGA infants is made evident in that some infants may not be identified as at risk when classified by weight alone, leaving them at increased risk for chronic disease later in life, but with no increase in the amount of preventative care they receive.