The Impact of Ultraviolet Light on Survival and Behavior of the Human Bed Bug, Cimex lectularius Linnaeus 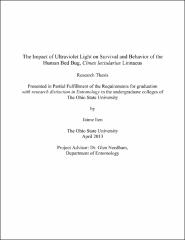 The dramatic resurgence of bed bugs in the United States poses significant problems for individuals, public health officials, and the pest control industry. Currently no individual control measure, chemical or otherwise, has proven to be one hundred percent effective in the removal of bed bugs from domestic structures. Alternative methods of control are needed to aid in a broader removal strategy. Ultraviolet light as a control tactic for arthropods is a new concept only now being explored. UV light is known to damage DNA; however, its various effects on arthropods have not been well documented. This study examines the impact of ultraviolet light on bed bug survival and behavior, and is a first step in determining the potential of ultraviolet light as a control measure. Two developmental stages of Cimex lectularius, the egg and the first nymphal instar, were exposed to ultraviolet light for periods of 1, 2, 5, or 10 sec at a distance of 4 cm. A dose response curve was created by calculating mortality following an interval of 2 weeks. Behavioral observations were also conducted to assess the effects of UV exposure on the host-seeking abilities of first instar nymphs. Nymphs were exposed for periods of 5 or 10 sec then released to search for a human host from a distance of 34 cm. The success rates and search times were recorded. Results of both experiments indicate UV light negatively impacts bed bug survival and host-seeking abilities.