Rhetoric in Anti-Immigrant Political Advertising from 2006-2012 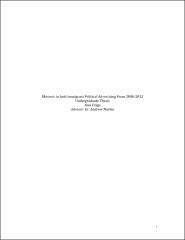 This paper explores the issues that candidates and political organizations focus on to garner anti‑illegal immigration support in their campaign advertising. Specifically, this research explores the content of political campaign advertising and how such adverts describe issues of immigration in terms of economic costs, fear or crime, and cultural differences. Fear based narratives were more commonly utilized from 2006-2010 until 2012, when economic narratives saw a sharp increase in prevalence and fear based narratives experienced a rapid decline. The results suggest that a concerted effort by the Republican Party to soften anti-immigration rhetoric in combination with the economic recession led the political rhetoric surrounding immigration issues to see a dramatic shift in focus.