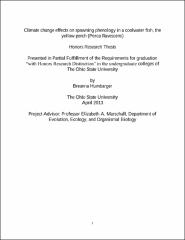 Understanding how the timing (or phenology) of important life history events, such as reproduction, are controlled by ambient temperature is a major focus of climate change research. Studies in terrestrial environments indicate many migratory bird species arrive earlier at spring nesting grounds and many plant species bloom earlier in response to early spring warming. Evidence suggests the timing of reproduction has important consequences for early-life growth and survival, which directly affect population dynamics. While many long-term phenology studies exist for terrestrial species, equivalent long-term studies of fish reproductive events are rare. Yellow perch Perca flavescens (economically and ecologically important across North America) is a coolwater fish species that typically spawns during April - May in Lake Erie, during a time when temperatures are highly variable from year to year. Previous laboratory studies indicate ambient spring temperature may have a minimal effect on the onset of yellow perch spawning; however, this hypothesis has not been tested in the field. Using data collected weekly during yellow perch spawning seasons on Lake Erie over three years (2010 – 2012), we quantified how the start, peak, and end dates of spawning correlated with weekly water temperatures. During this study, the percent of immature, gravid, flowing, or spent females was determined each week from a series of bottom trawls conducted across two nearshore-to-offshore transects in the western basin of Lake Erie. Spring air and water temperatures varied substantially during this study, which included the warmest spring on record for Ohio (i.e., 2012). Preliminary results indicate that yellow perch may not spawn earlier in response to warmer spring water temperatures. However, in response to cold spring water temperatures, spawning may be delayed. Ultimately, we discuss our results in context of other North American coolwater fish species, highlighting similarities, differences, and implications for management in a changing climate.