The Land Grab in Sub-Saharan Africa: Food Security and the Guise of Sustainability 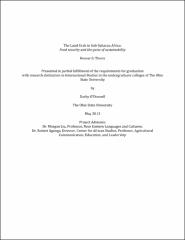 The continued demand for substantial food and energy supplies has motivated the recent surge of large scale land acquisitions in Sub-Saharan Africa (SSA). Collectively known as the “land grab, ” Oxfam has estimated that approximately 1000 deals have been made or are in the process of being finalized in SSA, with the total amount of land equaling the size of western Europe. Significant case studies indicate that these land grabs are not in the interest of the affected rural populations and pose serious threats to food security. Displacing and restructuring communities in addition to converting food producing lands to fuel producing, jeopardizes the livelihoods of the world's poor. Foreign investors are facilitating these land deals under the guise of sustainability and ecological consciousness. These actions suggest an expansion of the colonial mentality used to exploit the African continent for centuries.The research will center on the Herakles Farms land acquisition in Cameroon as a case study. In the wake of the global food crisis, understanding the land grab, the complicit actors and the effects on local populations is essential to the cessation of the African continent’s exploitation.