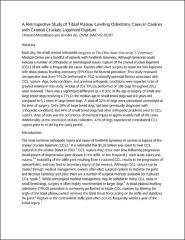 Each day, the small animal orthopedic surgeons at The Ohio State University’s Veterinary Medical Center see a handful of patients with hindlimb lameness. Although lameness could indicate a number of orthopedic or neurological issues, rupture of the cranial cruciate ligament (CCL) of the stifle is frequently the cause. Owners often elect surgery to repair the torn ligament, with tibial plateau leveling osteotomy (TPLO) as the favored procedure. This study reviewed retrospective data from TPLOs performed in 2012 to identify potential factors associated with CCL rupture. Age, body condition, and previous orthopedic conditions were expected to be of greatest interest in this study. A total of 201 TPLOs performed on 189 dogs throughout 2012 were reviewed. There was a significant difference (p = 0.001) in the age at surgery of small and large breed dogs receiving a TPLO; the median age in small breed dogs was 8.0 years old compared to 5.1 years in large breed dogs. A total of 32% of dogs were considered overweight at the time of surgery. Only 18% of large breed dogs had been previously diagnosed with orthopedic conditions, but 44% of small breed dogs had other orthopedic problems prior to CCL rupture. Also of note was the occurrence of meniscal injury in approximately half of the cases. Additionally, at the conclusion of data collection, 42% of dogs experienced contralateral CCL rupture prior to or during the study period.