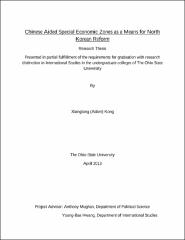 The purpose of this thesis is to provide an introduction and analysis of the special economic zones (SEZ) that are being established in the Democratic People’s Republic of Korea (North Korea or the DPRK) in conjunction with the People’s Republic of China (China or the PRC) and to determine whether these SEZs will result in an “opening up” of North Korea. Beijing, known historically for its pragmatic economic policies, typically invests into regions that it believes can increase the amount of foreign direct investments (FDI) by corporations and other nations. However, in the case of the special economic zones in North Korea, China is attempting to do far more than what their South Korean (Republic of Korea or ROK) counterparts are doing with the Kaesong Industrial Complex (KIC), which is to capitalize on the low labor costs in North Korea and encourage economic reform. In comparison to the KIC, which almost entirely focuses on manufacturing, Beijing seeks to create a zone that would allow exports, imports, manufacturing, financial services, and tourism. This is part of China’s overall Changchun-Jilin-Tumen (Changjitu) Plan, which focuses on boosting the economy of Jilin, a province that has lagged behind China’s rapid coastal development. Chinese investors believe that the geostrategic location of the Rason Special Economic Zone can help the Changjitu Project achieve a 19% growth rate and create an output of over $200 billion by 2020. The plan would also mean that Rason would become a transportation hub for the countries in North East Asia, including landlocked Mongolia, Russia, Japan, and South Korea. However, North Korea is not China. Therefore, the SEZ models that China experimented with during its opening-up era cannot be used as a panacea for North Korean economic failure. Whether an SEZ is supported by China or South Korea, it will always be limited by the North Korean regime. Armed guards, internet restriction, a lack of economic understanding, and threats of nuclear attacks by North Korea prohibit these zones from becoming industrious regions that could help stabilize the country. As a result, even Chinese aided SEZs will follow a historic trend of stagnating or failing unless North Korea makes significant changes in its economic and foreign policy.