Searching for Dark Galaxies Via Their Distorted Companions in the SDSS 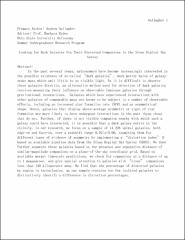 In the past several years, astronomers have become increasingly interested in the possible existence of so-called “dark galaxies”, dark matter halos of galaxyorder mass which emit little to no visible light. As it is difficult to observe these galaxies directly, an alternative method used for detection of dark galaxies involves measuring their influence on observable luminous galaxies through gravitational interactions. Galaxies which have experienced interactions with other galaxies of comparable mass are known to be subject to a number of observable effects, including an increased star formation rate (SFR) and an asymmetrical shape. Hence, galaxies that display above-average asymmetry or signs of star formation are more likely to have undergone interactions in the past than those that do not. Further, if there is not visible companion nearby with which such a galaxy could have interacted, it is possible that a dark galaxy exists in the vicinity. In our research, we focus on a sample of 14,226 spiral galaxies, both edge-on and face-on, over a redshift range 0.02<z<0.06, examining them for different types of evidence of asymmetry by implementing a “distortion index” D based on available pipeline data from the Sloan Digital Sky Survey (SDSS). We then further separate these galaxies based on the presence and separation distance of similar-magnitude companions on a plane-of-the-sky coordinate grid. Based on available merger timescale predictions, we check for companions at a distance of up to 1 megaparsec, and give special attention to galaxies with “close” companions less than 140 kiloparsecs away. We find that the percentage of distorted galaxies by region is inconclusive, as our sample contains too few isolated galaxies to distinctively identify a difference in distortion percentages.