Assimilating Suffering: The Banality of Non-Citizen Subjects in Dramatic Texts and Performance 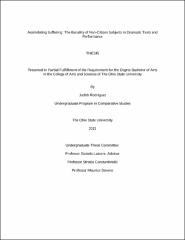 This thesis developed from my own experience of performing an undocumented domestic worker, Ana, in the play Living Out by Lisa Loomer as part of the Ohio State University Department of Theatre’s Fall 2011 season. This thesis investigates the productive forces at work behind the re-presentation of non-citizen subjects as constructed by the U.S. mainstream institution of theatre, specifically the popular immigrant narrative of the "search for the American Dream”. Such re-presentations have a propensity to neutralize, and thereby, assimilate the non-citizen subject’s suffering on stage as performed by the actor for the consumption of the American citizen-spectator. In this project, I examine the methods by which the U.S. mainstream institution of theatre utilizes nationalist and affective markers (such as the American Dream and, in the case of Living Out, the supposed shared humanity of mothering and work between an affluent white mother and her undocumented caregiver) to provide the American citizen-spectator with commonplace, recognizable imagery. This imagery works as a signifying function that is implicitly indebted to the organization of laboring bodies implicated by race, class, gender, and citizenship. My analysis is theoretically situated within textual analysis, theatrical critique, and autoethnography. The first section employs cultural, performance, and political theory to examine the textual production of the ideology of the American Dream and multiculturalism in the play Living Out. I then utilize autoethnography in the second section to interrogate my own staged performance of the undocumented domestic working experience and the ways that my acting body disavows the affective experiences of undocumented domestic workers existing in the U.S. The concluding section illuminates the methods by which non-traditional Latina/o and “third-world” theatre producers have resisted the onerous influence of the U.S. mainstream institution of theatre on Latina/o re-presentation. With this thesis I hope to contribute to the fields of border, ethnic, and theatre and performance studies as well as expand transnational/migration discourses on the cultural production of the narratives of noncitizen subjects.