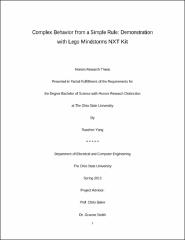 This report describes the successful implementation of two robots, built using Lego Mindstorms, that demonstrate how complex animal behaviors can be replicated using a simple algorithm to replicate a two neuron nervous system. The process of cognition and decision making inside the mammalian brain occurs subtly but near instantaneously and in a way that makes it hard to replicate synthetically. However, the understanding of its behavior is valuable in multiple disciplines and it may be applied to future technologies. In order to explore some behavior that relates to sensing and cognition, the Lego Mindstorms NXT robot kit has been used. It is a sophisticated kit that includes a programmable embedded computer, known as ‘the Brick’. This brick controls the mechanical system made up from a set of modular Lego sensors and motors as well as Lego parts. The base set of equipment and the customized add-ons provide an open-ended platform that makes it possible to test a number of complex theories. The main objective of the proposed project is to demonstrate how a complex behavior can be simulated just based on some simple rule that represents the operation of neurons. After investigating the capability and limitation of critical sensor used for the robot and the motor specifications, the female cricket’s behavior of locating her mate in dark with sound signals only, has been mechanically mimicked on Lego using two sound sensors and two motors. Subsequently the echo location process of a bat using echoic flow theory has been studied for collision avoidance. Preliminary results have had successful and constant performance showing the potential of using Echoic Flow for steering control on vehicles. This approach offers scientific researchers with an alternative to test and experiment their hypothesis before applying it to large scale or real-life test subjects, especially in cognitive sensing or intelligent control.