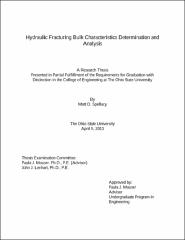 The goal of this research is to begin to characterize the chemical composition of residual fracturing and flowback fluids being produced by hydraulic fracturing of Marcellus Shale in our region. During the summer of 2012, fracturing and flowback fluid samples were collected from three wells in Pennsylvania. Samples were shipped to OSU for determination of conductivity, total dissolved solids, dissolved oxygen, and pH. Further chemical analysis was conducted to determine concentrations of select anions, cations, carbon, and nitrogen species. Most analyte species increased in concentration dramatically in the days immediately following fracturing and gradually plateaued during the subsequent 82 days of flowback. Data was compared to that published in recent years and to the Ohio Environmental Protection Agency’s maximum contaminant levels (MCLs) and secondary maximum contaminant levels (SMCLs). Every constituent measured for which the EPA has set an MCL or SMCL—including the actinide uranium and the trace metals strontium and arsenic—was present at concentrations significantly higher than that constituent’s respective MCL or SMCL. Furthermore, total dissolved solids, barium, calcium, chloride, iron, magnesium, sodium, and strontium concentration magnitudes and trends were consistent with the limited existing data available, providing confidence that our data accurately represents the chemical characteristics of fluids produced from hydraulically fracturing Marcellus Shale. Better characterization of fracturing and flowback fluids will help shed light on appropriate treatment technologies and impacts these fluids might have if accidentally released to the environment.