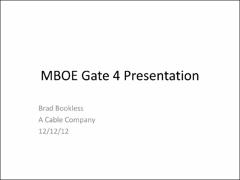 Project 1: Improve Performance of Open Mentoring System and Develop Effective Mentoring Process for Sales. Metrics and effectiveness of Open Mentoring (OM) tool are not on target. It is believed that re-launch of the system will yield more usage and satisfaction with the system. Also, there is no mentoring happening in the Sales organization. It is believed that development of a mentoring program for sales will reduce learning curve, increase employee satisfaction and grow sales. Countermeasures for OM system included re-launch, executive video campaign, and online training. Return-On-Investment was evidenced by both the increase in number of system engagements from 37 to 358, and by the number of employee profiles in the OM system increasing from 272 to 663. Also, the new popularity of the system motivated HR to roll out the program to the EMEA region. A pilot mentoring program was created in the sales organization involving 17 mentors and 23 mentees. It was decided that a group learning approach would be best to foster open communications among the group members. Four teams were formed, along with four one-on-one relationships. Activities of the group and pairings would be monitored for successes that would become best practices for phase 2. Multiple challenges and roadblocks occurred shortly after the sales mentoring pilot was developed, and it forced the participants to shift focus to other sales related corporate mandates and objectives. A major reorganization of the company followed, resulting in a promotion for me. As Manager of the Global Accounts (GA) Team, my focus was away from mentoring the larger sales force, as I am now responsible for development of six Global Account Managers and one Technical Manager. Two of the mentoring teams continue to meet and move forward with mentoring, but the shift in focus will limit the ability to determine results. Project 2: Improve Performance of Global Accounts Team Through Mentoring and Application of Lean Tools. Project Two began in August, 2012, following my promotion. The key issue facing the team is a lack of balance in contribution of the team members. It is believed that learning from project 1, along with lean tools learned in MBOE can assist in employee development and balanced revenue growth for the GA Team. 5-Why analysis was conducted to determine root cause for lack of GAM visibility, revenue balance, and unbalanced revenue contribution. Countermeasures have been developed and are being implemented for 2013. Also, a RACI analysis that was completed in 2011 but never implemented has been revitalized for clarification of roles and responsibilities in the sales process. This should lead to fewer lost opportunities and better coordination of the sales teams on future project bids. Visual management will be used to keep the team on track. All activities will track the 2012-2016 Hoshin Plan that was created from the Annual 5-year plan.