The Representation and Analysis of Dynamic Networks 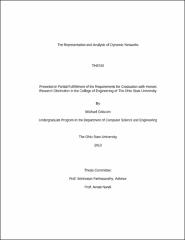 Many real-world phenomena, such as article citations and social interactions, can be viewed in terms of a set of entities connected by relationships. Utilizing this abstraction, the system can be represented as a network. This universal nature of networks, combined with the rapid growth in scope of data collection, has caused significant focus to be placed on techniques for mining these networks of high-level information. However, despite the strong temporal dependencies present in many of these systems, such as social networks, substantially less is understood about the evolution of their structures. A dynamic network representation captures this additional dimension by containing a series of static network “snapshots.” The complexity and scale of such a representation poses several challenges regarding storage and analysis. This research explores a novel bit-vector representation of node interactions, which offers advantages in its ability to be compressed and manipulated through established methods from the fields of digital signal processing and information theory. The results have demonstrated high-level similarity between the considered datasets, giving insights into efficient representations. By way of the discrete Fourier transform, this research has also revealed underlying behavioral patterns, particularly in the social network realm. These approaches offer improved characterization and predictive capacity over that gained from analyzing the network as a static system, and the extent of this descriptive power obtainable through the bit-vector representation is a question which this research aims to address.