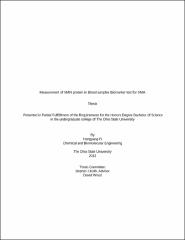 Academic unit is not listed.

Spinal muscular atrophy (SMA) is a severe motor neuron disease that is the leading genetic cause for infant mortality. This disease arises from mutations in the Survival of Motor Neuron (SMN) gene that are implicated in reducing the overall expression of SMN. Drug development in the SMA field has focused on discovering therapeutic agents that counter these mutations by increasing the expression of SMN. Valproic acid (VPA), a Histone Deacetylase inhibitor, was identified to increase SMN expression in cell culture. However, a recent clinical trial suggested that VPA has no effect on motor function in ambulant adult SMA patients. The interpretation of this result depends upon proof that VPA had the desired effect within cellular nuclei in these patients. In this study, blood samples collected during the course of the clinical trial were analyzed to determine the effect of VPA on molecular biomarkers. Using mass spectrometry, ELISA and immunoassay, we measured histone acetylation and the expression of both SMN protein and mRNA. Systematic analyses showed that while the administration of VPA increased histone acetylation and mRNA, it did not increase the expression of SMN protein. Hence we conclude VPA would not be an efficient drug against SMA and the increase in histone acetylation level does not improve motor functions in SMN patients. VPA fails to improve SMN proteins in vivo. However, due to the potential for SMA biomarker tests, the systematic methods used for the study of SMN protein expressions may still be used for future SMA clinical trial design and biological analysis.