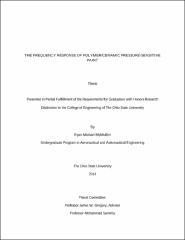 There are two relevant timescales in Pressure-Sensitive Paint (PSP) dynamic response. The first is the luminescent lifetime of the chosen luminophore, and the second is the time required for oxygen molecules to diffuse through the paint layer. In order to evaluate the relative importance of these two mechanisms for Polymer/Ceramic PSP, its frequency response characteristics were studied using an acoustic resonance tube. Treating the paint system as a black box, the typical paint structure was altered in several ways, and the observed changes in response characteristics were used to infer information about the roles of the luminescence and diffusion processes in the dynamic response. These alterations include surface roughness, luminophore application method, and basecoat optical density. The experiments suggest that although luminescence is the more important of the two mechanisms, diffusion effects are still present. To verify this, the experimental data were compared with existing theoretical models. One model accounts for only the luminescence process, and the other accounts for both luminescence and diffusion. It was then shown that the luminescence and diffusion model agrees well with the data, while the luminescence only model does not, thereby demonstrating that diffusion effects need to be included for accurate determination of the Polymer/Ceramic PSP transfer function.