The Influence of Mood States on Anchoring Effects 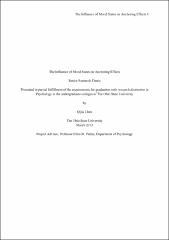 The Influence of Mood States on Anchoring Effects

Anchoring effects refer to the phenomenon that arbitrary numerical information can bias subsequent estimates. These anchoring effects appear to be influenced by the presence of specific emotional states. However, among existing studies that closely examined the effects of specific emotional states on anchoring, there is a lack of agreement in terms of interpretation of these results. Previous research has demonstrated that specific emotions often carry over from past situations to color future judgments (Keltner, Ellsworth, & Edwards, 1993; Han, Lerner, & Keltner, 2007). The current study further investigated the effects of sadness and happiness on anchoring effects and their underlying mechanisms. Because previous studies proposed deliberation as the potential cause of greater anchoring effects in people induced to sad mood (Bodenhausen et al., 2000), in the present study, the level of deliberation was manipulated through the presence versus absence of a cognitive- load manipulation. Consistent with previous findings, individuals induced to sad moods demonstrated greater susceptibility to provided anchors than their counterparts, but only when the cognitive load was absent. Under cognitive load, participants in all three mood states (happy, sad and neutral) demonstrated greater anchoring effects compared to their counterparts with no cognitive load; participants under cognitive load also reported greater confidence in their estimates. The result suggests that other mechanisms such as affect as spotlight may account at least in part for the difference in anchoring effects across different mood conditions.