Design of a Solar Thermoelectric Generator 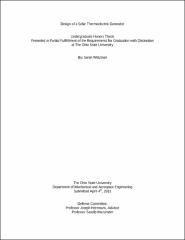 In a world where fossil fuels dominate as energy sources, the need for an economically and commercially viable renewable energy source is dire. The processes through which fossil fuels are formed do not occur fast enough to replenish their sources to meet society’s demands, and combustion of fossil fuels produces carbon dioxide, a greenhouse gas linked to global warming. Solar energy has proven itself to be a promising alternative, with the field dominated by photovoltaics on the consumer-scale and solar thermal power on the plant-scale. Yet solar thermal systems have an innate advantage in their use of all wavelengths of incident radiation as opposed to just light. In this research, thermoelectrics are being explored as a viable option for small-scale solar thermal applications. Thermoelectrics are based on the Seebeck effect, stating that a voltage is induced when a temperature gradient is applied to the junctions of two differing materials; in the case of a solar thermoelectric generator (STEG), the hot side is the solar absorber and the cold side is the heat sink. This research proposes to design, build, and test a prototype STEG to contribute to the further development of STEGs as reasonable solar thermal energy sources for the consumer market. The design process involved calculating and optimizing the energy balance across the absorber, minimizing heat losses, analyzing heat transfer through the thermoelectric elements, and analyzing the electrical power system. The testing process involved assembling the system, measuring the balance of heat and heat losses, and measuring the electrical power generated by the thermoelectric module connected to varying resistive loads in order to ultimately measure the STEG’s efficiency. Literature suggests that STEGs can reach 5.2% efficiency when operating in a vacuum and 0.03% in air, both without optical concentration, although this STEG only reached a peak efficiency of approximately 0.03%.

3rd Place in Engineering at the Denman Undergraduate Research Forum, 2013