A Statistical Analysis of Blackbird Aggressiveness 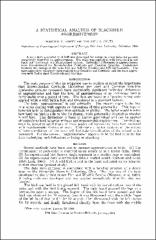 scale with a reliability of 0.82 was developed for rating an avian behavior pattern tentatively identified as aggressiveness. The scale was applied to wild birds held in the hand and threatened in a standardized fashion. Individual differences in aggressiveness were demonstrated for Brown-headed Cowbirds and Common Grackles. Correlation between two ratings of the same bird was 0.53 for Grackles and 0.79 for Cowbirds. The most aggressive species of those studied were Grackles and Cowbirds and the least aggressive were Red-winged Blackbirds and Starlings