An acoustic investigation of postaspirated stops in Seville Spanish 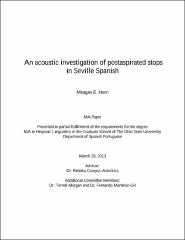 MA Paper on the Postaspiration of Voiceless Stops in Seville Spanish (1.844Mb)

The purpose of this investigation has been to analyze the phonetic mechanisms behind an innovative sound change currently occurring in Seville, Spain. The aspiration of the consonant /s/ in syllable final position to a breathy [h] is a common process in many Spanish dialects. However in Sevillian Spanish, when followed by the voiceless occlusive /t/, the aspiration of the /s/ is being realized as postaspiration resulting in the affricate [ts]. This change of production from [st] > [ts] has become a distinctive dialectal feature of the region and is not documented in any other Spanish consonant system. This study involves the analysis of recorded speech of 26 native Spanish speakers from Seville, Spain evenly distributed within the sociolinguistic categories of age, gender and educational level. In order to investigate the impact of the following voiceless consonant on the postaspiration of /s/, each participant was recorded while reading a list of sentences that included the consonant clusters, [sp], [st] and [sk] in three distinct phonetic environments: word internally, over word boundaries and in the presence of stressed and unstressed vowels. The speech analysis software Wavesurfer was then used in order to determine the degree of aspiration after each occlusive /p, t, k/ in the different phonetic contexts. This measurement, known as Voice Onset Time (VOT), is the duration of aspiration in milliseconds after the explosion of air from the occlusion and the beginning of the following vowel. Also included in the measurements of each token were the length of the preceding vowel, the duration of preaspiration and the duration of the closure of each voiceless occlusive. A four part statistical analysis was performed to determine the existence of statistically significant relationships between postaspiration and the different social and linguistic variables. The results show that the phenomenon is linguistically motivated, as no social factors were selected as significant predictors when speaker was integrated as a random effect into the statistical models. First, when postaspiration of the following occlusive was analyzed as a categorical dependent factor, either present or absent, it was found that the place of articulation of the following occlusive is the only reliable predictor. More specifically, both dental and velar stops predicted significantly higher rates of longer postaspiration than their bilabial counterpart. Second, when postaspiration was analyzed as a continuous dependent factor, the duration of postaspiration could be statistically predicted only by the linguistic factors. As found by this study, significantly longer postaspiration durations were predicted when the consonant cluster consisted of a dental or velar occlusive in a word internal boundary with a preceding stress pattern. Third, the effect of the phonetic realization of the sibilant as a part of the target cluster was analyzed. The possible phonetic productions were categorized as either a fully realized sibilant [s] or one of two types of reduced variants, either the aspirate [h] or the phonetic zero [Ø]. It was found that, across social and linguistic environments, the two reduced variants patterned similarly and predicted significantly longer durations of postaspiration than that of the fully realized sibilant. Finally, a series of correlation analyses show that significant negative correlation relationships exist between the duration of the postaspiration and the surrounding segments. A combination of these findings is shown to provide strong evidence that this postaspiration phenomenon is a result of coarticulatory compensation. Thus, the results from this study are interpreted via the theoretical model of Articulatory Phonology. Through the use of this framework, it is shown that when the individual articulatory gestures associated for each sound are placed onto a spatiotemporal spectrum, intergestural timing is capable of capturing the wide variety of pre and postaspiration productions found in the study. Additionally, the model allows for the prediction of possible future outcomes for this particular phenomenon. Finally, the research presented here contributes to a better understanding of the phonetic inventory of Spain Spanish by providing statistical analyses of linguistic data and an understanding of the intergestural configurations resulting in these postaspirated productions. Furthermore, it is shown that, contrary to past studies, this particular phenomenon is being driven by linguistic forces instead of social factors. This provides insight into the importance of investigating and understanding possible underlying phonetic mechanisms when interpreting the development of innovative productions in different dialects of Spanish around the world.