Observations on the Parasites (Hymenoptera, Diptera) of Trichotaphe Levisella Fyles (Gelechiidae, Lepidoptera) with Notes on the Host 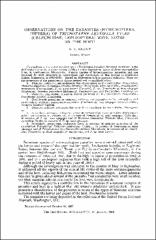