Development of a Nanoscale DNA Based Force Transducer 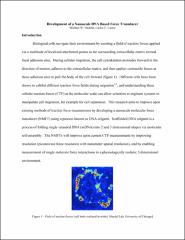 Biological cells navigate their environment by means of local forces that push and pull on the cell substrate. These traction forces are generated internally and transmitted to the external substrate via attachment points called focal adhesions. Traction forces mediated by single membrane protein complexes are on the order of 10’s of piconewtons (pN); however, current technologies to measure these forces are limited to ~100-1000 pN resolution and are restricted to non-physiological 2D environments. The goal of this research is to develop a nanoscale sensor-based approach to measure traction force fields at resolutions down to the 1-10’s of pN scale in physiologically realistic three-dimensional fibrous environments. These nanoscale molecular force sensors (NMFS) were designed and fabricated using the nanotechnology scaffolded DNA origami. DNA origami is a powerful tool to create complex 3D structures with typical dimensions of 10-100 nanometers. This approach relies on molecular self-assembly that is driven by DNA base-pairing between a long (~7000-8000 bases) single stranded DNA (ssDNA) “scaffold” and many short (~30-50 bases) ssDNA “staple” strands. The scaffold strand is derived from the M13MP18 bacteriophage viral genome and has a sequence that is completely known. The staples are designed and synthesized to be piece-wise complementary to the scaffold. The addition of the staples to the scaffold under the appropriate buffer conditions causes folding of the scaffold into bundles of double-stranded DNA (dsDNA) held in a mechanically stiff 2 or 3 dimensional geometry. This work demonstrates two nanoscale force transducer devices, 1) A binary device that reports on a force threshold, and 2) an analog device that gives a continuous force readout. The binary design relies on the facilitated rupture of DNA secondary structures (DNA hairpins) specifically positioned within the DNA origami structure, resulting in large conformational change of the device. The analog design relies on the straightening of curved DNA origami bundles (much like a macroscopic leaf spring) that continuously deform with calibrated stiffness under increasing applied force. Deformations of both devices are measured with a fluorescence readout, which is amenable to live cell studies in real time. Our approach should achieve pN level force resolution and ~10nm spatial resolution for traction force measurements, which represents a significant improvement over current technology. These devices have been designed and fabricated in our lab. Initial TEM and magnetic tweezers calibration experiments demonstrate the ability to tune force-extension behavior to monitor forces in the range of 1-20 pN. These devices have been integrated into a three-dimensional fibrous scaffold for cell migration experiments. These NMFS-functionalized scaffolds will be implemented in proof-of-principle studies to investigate how traction forces at the single molecule scale enable cell migration along nanofiber pathways. The next step is to seed the NMFS/nanofiber scaffold with cells and view their migration characteristics. Ultimately, this functional scaffold will be used to study differences in migration behavior between healthy and cancer cells. We hypothesize that there will be a difference in cancer cell migration both in terms of magnitude of individual focal adhesion forces as well as the geometry of the traction force field. The knowledge gained from these experiments will allow us to develop separation pathways using nanofibers for cell sorting and early cancer detection.