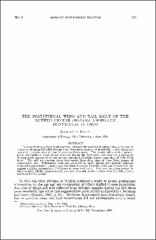 Because feather-replacement patterns influence the validity of aging criteria, 21 captive and 47 wild-trapped Ruffed Grouse from Ohio were studied to determine if their wing and tail molt is comparable to that of more northern races. The results indicate that juvenal primaries numbers 9 and 10 are retained during the first year, but that the progression of wing molt appears to be one to one and one-half weeks slower than that of New York birds. The tail molt occurs about four weeks later than that of New York grouse of comparable age. Differences were not detected in molt timing and pattern between wild and captive birds. Aging keys for chicks between 1 and 18 weeks are adjusted for the apparent slight geographical difference in wing molt rate. The peak hatching period in Ohio is May 15-28, approximately one and one-half weeks earlier than hatching dates reported for Wisconsin.