Thalia's Sweetest Child: Dora Jordan and the Performance of Maternity 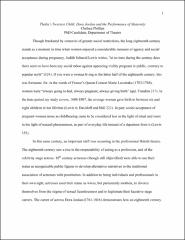 18th century celebrity actresses’ bodies and private lives were often subject to public scrutiny: their figures, voices, professionalism, and relationships were all topics of speculation and conversation in the press. In response, actresses masterfully crafted public personas to build and maintain a relationship with their audience. The public and private collided, however, when these actresses appeared on stage while visibly pregnant. Dorothy (Dora) Jordan was the leading comic actress at Drury Lane theatre 1785-1812 and mother of fourteen children, including ten with the Duke of Clarence, who later became King William IV. In this paper, I use examples from her career to demonstrate the strategies by which she used her maternity to counteract accusations of unprofessional or amoral behavior.