The Use of Pravastatin As An Otoprotective Agent 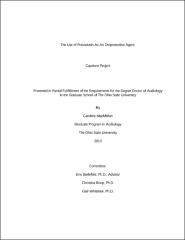 Cisplatin is a commonly used anti-neoplastic medication used to treat a variety of cancers. While effective in treatment of cancer, the use of cisplatin causes a variety of side effects including ototoxicity. As such, research has striven to find otoprotective agents in order to prevent these effects. In this study, a cholesterol medication, pravastatin, will be examined for possible otoprotective benefits. Prior research has demonstrated pravastatin’s protective effects in the renal system through a decrease in the expression of p53, a protein crucial to process of apoptosis (i.e. cell death). As p53 is also a main component of apoptosis within cochlea during use of cisplatin, pravastatin was deemed a logical treatment. In order to determine the possible benefit of pravastatin, a protocol was developed where hearing thresholds were obtained via Auditory Brainstem Response (ABR) at .5, 10, 15, 20, 30, and 40 kHz for two groups of six Sprague-Dawley rats. Additionally, the weights of each rat were measured as an indicator of general health over the course of the study. Following initial measures, rats were injected intravenously with cisplatin followed by a series of intraperitoneal injections of either pravastatin solution (experimental group) or saline solution (control group) over the course of a week. At the end of this week, hearing thresholds and weights were measured again for all surviving rats. Results revealed no significant differences on either measure between the two groups in question. However, definitive conclusions on the possible otoprotective effects of pravastatin cannot be made without further, more comprehensive investigation of the medication’s pharmacokinetics.