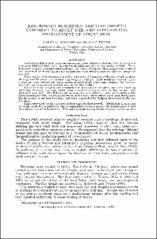 Red-winged Blackbirds (Agelaius phoeniceus) were studied at Toledo, Ohio, in an upland habitat in 1964 and 1965, and at Battle Creek, Michigan, in a marsh habitat in 1965. Nestlings were weighed and measured each day. In 1966 at Wooster, Ohio, adults were weighed and measured to obtain figures for comparison with nestling sizes at different stages in nest life. Mean weight of 18 neonates was 3.19 g, which was 7.5 percent of 18 adult female weights (41.6 g) and 79 percent of 18 fresh egg weights (4.02 g). Male nestlings showed higher values for mean weight and mean length of other body parts than females, but females reached a greater percent of adult size faster than males. All mean body weights and measurements increased in absolute size from hatching until day 10 except for gape width, which reached maximum size on day six and then decreased in width. The differential increase of size in different body parts shows a distinct correlation with their function while in the nest; those which were used during nest life developed in the first five days and those required after fledging developed in the last, five days. Rapid growth in weight occurred before rapid feather growth. Reduction in increases of weight each day is probably due to expenditure of more energy for feather growth and for maintenance of endothermy. The same phenomena are shown for many other species..