Who Says What about Whom: Cue-taking Dynamics in the Impression Formation Processes on Facebook 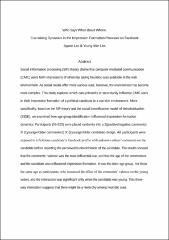 Social information processing theory claims that computer-mediated communication users form impressions of others they encounter on the Web by taking heuristic cues available in the environment. As social media offer various cues from the sides of both the target and unknown others, however, the way people utilize cues on the Web also has become more complex. This study explored which among these multiple cues primarily influenced CMC users in their impression formation processes in the context of a political candidate's Facebook profile. Based on social identification model of deindividuation, we particularly examined if and how the shared group identities in terms of age and sex influenced the cue-taking dynamics. Participants (N=544) were randomly assigned into one of the 16 conditions (2: positive vs. negative valence of others' comments on the candidate by 2: younger vs. older commenters' age by 2: candidate's age by 2: candidate's sex) and exposed to a Facebook profile with a fictitious candidate's photo and two comments with the commenters' photos before responding to a questionnaire measuring their impressions of the candidate (i.e., attractiveness and competence of the candidate, and participants' feelings toward the candidate). The results showed that others' comments were the most influential cues for all three dimensions of the impression, and that age or gender similarity between the candidate and the participants influenced mainly the perceived attractiveness the candidate. The 3-way and 4-way interactions indicated how complex the cue-taking dynamics on social media could become and prompted further research on the underlying mechanism.