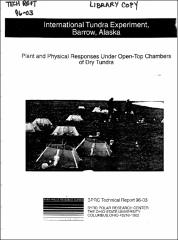 The standard open-top chamber manipulation of the International Tundra Experiment continued at Barrow, Alaska during the summer of 1995. The monitoring of the two ITEX species Cassiope tetragona and Salix rotundifolia, in addition to 25 species was continued in the 1994-site, and a new site was established in the nearby marsh with the same design focusing on the ITEX species Carex aquatilis ssp. stans and Eriophorum angustifolium ssp. triste. In addition, all other vascular species occurring in the Meadow site were monitored. In 1995, the instrumentation of the experiment was expanded. Temperature data loggers were installed in two thirds of the plots in both sites and a few humidity data loggers were set up at the Ridge site. In 1995, the shielding of the thermistors of the temperature data loggers was improved. A comparison of the new shields with the previous type was made. In addition, an experiment was carried out to document the vertical and horizontal temperature variation in the open-top chambers. A clip harvesting experiment was initiated at the Ridge site, studying how a temperature enhancement influences the biomass production. Detailed vegetation analyses of the species composition of vascular plants and cryptogams of the Ridge plots was made and the depth of thaw was measured during the entire growth season. Although the mean summer temperature in 1995 was 1.6° C lower than in 1994 the warming effect of the OTC's was similar each year, c. 1.7° C. The cold summer affected the monitoring of Cassiope tetragona and only very few flowers emerged in the control plots while the number of flowers in the OTC's was smaller than last year, hence no continuing. No effect was seen as in high arctic Canada where the number of flowers increased significantly after the first summer of temperature manipulations. The difference between experimental and control plots in annual growth increment of + 0.5 em was just barely significant. Although this difference is the same as the preceding summer the growth was much smaller in 1995 presumably because of the cold summer. Compared to 1994 the growing season of female Salix rotundifolia started 5-9 days earlier this year in both types of plots, whereas the onset of seed dispersal is 9 days later in OTC's and 2 days in controls this year. There is no difference in the length of the growing season between OTC's and controls this year. In 1994 OTC's started 5 days earlier and controls 9 days earlier. Differences in length and weight of the leaves are the only measures that show significant differences between plants in experimental and control plots. The difference (1.8 mm) in length of the longest leaf is significantly bigger in OTC' s as in leaf weight (1.6 mg). Like the females the flowering of male Salix rotundifolia started earlier this summer. The onset of dispersal of pollen and the time of all pollen released were highly significant earlier in the OTC's. The period of pollen release is only slightly longer (c. 10%) in the experimental plots, which contrasts a 34% longer period in 1994.