On the Late Precambrian-Early Paleozoic Metavolcanic and Metasedimentary Rocks of the Queen Maud Mountains, Antarctica, and a Comparison With Rocks of Similar Age for Southern Africa 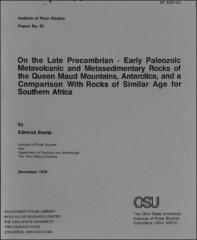 Institute of Polar Studies Report No. 62

The non-intrusive portion of the late Precambrian-early Paleozoic basement complex in the Queen Maud Mountains, Antarctica, consists of graywacke-shale sequences of the Beardmore Group (Goldie, Duncan, and LaGorce Formations), rhyolite porphyries of the Wyatt Formation, and rhyolite porphyries, minor basalts and carbonate, clastic and volcaniclastic metasedimentary rocks of the Taylor and Fairweather Formations. A model for the evolution of the Ross Orogen between Byrd Glacier and the Pensacola Mountains is presented combining results of this study with published reports from adjacent areas. The deep-sea fan deposits of the Beardmore Group are conformably overlain and intruded by extrusive and hypabyssal portions of the Wyatt Formation. An arc of volcanic islands producing ash-flow tuffs, ash-fall tuffs and lavas, and minor basaltic lavas was active in the early Cambrian. Sediments accumulated in association with the volcanic rocks. All of these rocks were deformed, intruded and metamorphosed to varying degrees during the Ross Orogeny which ended by middle Ordovician. Rocks of the Damara Orogen of southern Africa were probably linearly continuous with the Ross Orogen prior to the breakup of Gondwanaland. A clastic pulse recognized in late Precambrian sediments in the Cape, the Vanrhynsdorp area and the Nama Basin is interpreted as representing the initiation of the Damara Orogeny in South and South West Africa. A comparison of the evolution of the Ross and Damara Orogens concludes that the Cape region in South Africa occupied a tectonic regime transitional between the regime of cratonic collision in South West Africa, where orogeny was sustained from the late Precambrian to the middle Orodovician, and the regime of subduction of oceanic crust beneath a continental margin in Antarctica, where two episodes of sedimentation and deformation occurred.