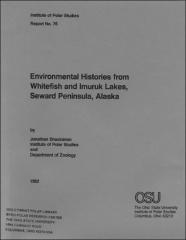 Institute of Polar Studies Report No. 76

Sediment cores from Imuruk and White fish Lakes, Seward Peninsula, Alaska, were analyzed for pollen and dated using radiocarbon techniques. The paleomagnetic study greatly extended the range of the radiocarbon dating by providing evidence for the occurrence of the Blake paleomagnetic event which occurred 100,000-125,000 years ago. Imuruk Core V appears to be about 140,000-150,000 years old. Radiocarbon dates show that the record was truncated about 10,000 years ago. Pollen analysis, supported by these dates, suggests that the Wisconsin in the Arctic consisted of three major phases: a cold period when the vegetation was dominated by Gramineae, Cyperaceae, and Artemisia, lasting from about 80,000 until 55,000 B.P. Then there was a warmer interstadial when Betula, Alnus, and Picea became much more abundant between 55,000 and 35,000 B.P. Finally there was another cold period with steppe-tundra vegetation which began about 35,000 B.P. and lasted until 10,000-15,000 B.P. This chronology is very similar to that suggested for Siberia. The dates are not precise and the history may be found consistent with the dating of glacial events from other parts of the world. There is evidence from Imuruk to suggest that the Wisconsin was preceded by a long period of declining temperatures during the Sangamon. The vegetation then consisted of shrub tundra with Picea and Alnus often above trace amounts. The Whitefish Lake record spans at least the past 10,000 years. The pollen record, the first Holocene record from this region, reflects a vegetation in which Cyperaceae and Alnus are abundant. The record indicates that there was no significant climatic change during the Holocene. This study provides the best dated, well documented, long Arctic pollen record that gives a good history of the major vegetation changes and, hence, a good indication of the nature of the climatic record of the Wisconsin in the Arctic.