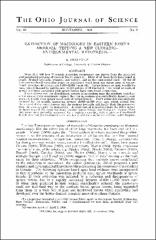 More than 600 late Wisconsin mastodon occurrences are known from the glaciated and periglacial portions of eastern North America. Most of of them have been found in poorly drained lowlands, swamps, and valleys, and on the continental shelf. Of the 28 radiocarbon-dated mastodon bones or associated wood from the entire area of eastern North America, 80 percent are 9,000-12,000 years old. Spruce forests or open woodlands have been indicated by palynologic investigations of 18 mastodon sites; wood or cones of spruce and trees associated with spruce forests have been found at ten sites. This evidence and the distribution pattern of mastodons near the northern boundary of the area of their occurrences suggest that the mastodons of eastern North America were associated with open spruce woodlands or spruce forests. Their extinction was probably initiated by the rapidly increasing dryness 10,000-11,000 years ago, which caused first the retreat of the spruce forests into the moister lowlands and finally their disappearance from the area occupied by mastodons. A migration of mastodons from the relict spruce enclaves toward the more northerly located spruce forests was hampered because these two areas were probably separated by a rapidly expanding belt of pine and hardwood forests over the better-drained morainic, kame, and dune areas in the Great Lakes Region.