The Tidal Wave of People 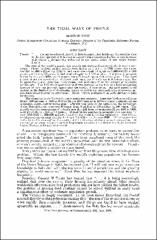 Thesis: " . . . the unprecedented growth in human population holds out the warning that in the final quarter of this chaotic century the accumulated effect of this increase will create a devastating upheaval in the social order of the entire human family . . . ." The rate of the world's population growth has increased spectacularly in recent centuries. Three hundred million people were living at 1 A.D.; in 1700 years this figure doubled to 600 million; by 1900, it had more than doubled again to 1,600,000,000 in 200 years; within only 60 years, it had doubled again to 3 billion plus. The present prospect is that by the year 2000, world population will double again to 6 billion plus. This rapid growth is not the result of an increased birth rate, but of a decline in the death rate, due to agricultural and industrial revolutions, and particularly to the impact of scientific technology. The 1966 world growth rate of two percent, in the face of a food production increase of only one percent, aggravates the threat of starvation. An anticipated rapid decline in the death rate of developing countries will bring increased rates of growth, unless widespread starvation intervenes. There is little prospect of an early decline in high birth rates. The situation in the United States is much less ominous. Here the birth rate fell from 55 per 1000 persons in 1820 to 18.4 births per 1000 persons in 1934—without a significant use of modern contraceptive techniques. Despite this drop in the birth rate, the population of the United States increased 40 times, from 4 million to 160 million, in 180 years. The growth was the consequence of a death rate that fell from an estimated 25 per 1000 in 1800, to 17.2 in 1900, to a low of 9.5 today. United States population hopefully may stabilize by year 2000-2025 at 300-350 million, based on the most favorable estimates. Meanwhile, world population is estimated to climb to 6-7.5 billion by the year 2000. The main problem in the United States will be the quality of life in the face of this increased congestion. In the rest of the world, the problem will be physical survival, the effect of which, on domestic United States, is difficult to forecast.