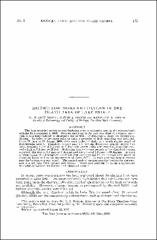 The first recorded severe oxygen depletion over an extensive area in the western basin of Lake Erie occurred in 1953. Because sampling in the past was done at irregular intervals, it has been difficult to determine the severity, or duration of these low-oxygen conditions. In order to get more reliable data, a program of daily sampling was initiated. From 22 June to 31 August 1966, data were collected daily at a single station south of Rattlesnake Island. Dissolved oxygen near the bottom fluctuated greatly during this time, reaching a low of 0.1 ppm on 1 July, the lowest value ever recorded from this area, and a high of 9.2 ppm on 19 July. Following this, two more periods of low dissolved oxygen occurred, the first of 3.7 ppm on 7 August and the other of 3.0 ppm on 30 August. In each of these cases, the low-oxygen condition was accompanied by an average wind speed of about six knots and an air temperature of about 26°C. In each case the drop in oxygen near the bottom was very rapid. The mean dissolved oxygen near the bottom for the summer was 5.0 ppm (61.6 percent saturation). Statistical analysis indicates a significant relationship between wind speed and dissolved oxygen.

Author Institution: Faculty of Entomology and College of Biology, The Ohio State University