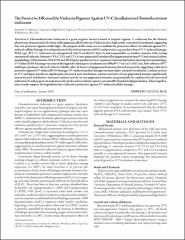 Chromobacterium violaceum is a gram-negative bacteria found in tropical regions. C. violaceum has the distinct phenotypic characteristic of a deep violet pigment called violacein. Violacein has a high molar extinction in methanol, suggesting that it is protective against visible light. The purpose of this study was to establish the protective effects of violacein against UV-induced cellular damage. It was hypothesized that violacein protects DNA and proteins (e.g. catalase) from UV-C induced damage. Wild-type (WT) C. violaceum was mutagenized with N-methyl-N’-nitro-N-nitrosoguanidine to produce mutants with varying amounts of violacein. Mutants CV9, CV13, and CV14 (non-pigmented) produced less pigmentation than WT and retained colony morphology, while mutants H19, H20, and H21 (hyper-producers) over-expressed violacein but had an altered petite morphology. UV-induced DNA damage was assayed through sub-culture post-irradiation at 6,000μW*s-1*cm-2 at λ=253.7nm. Sub-cultures of WT and hyper-producers showed reduced viability after 48 hours; nonpigmented mutants showed no growth, suggesting violacein is protective against UV-induced DNA damage. UV-induced catalase damage was assayed pre- and post-irradiation. Catalase activity in WT and hyper-producers significantly decreased post-irradiation; catalase activities of non-pigmented mutants significantly increased post-irradiation. Increased catalase activity in non-pigmented mutants can potentially be explained by the increased induction of catalase genes in response to elevated reactive oxidative species, presumably from lack of pigmentation. Taken together, these results support the hypothesis that violacein is protective against UV-induced cellular damage.