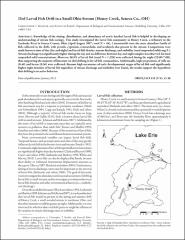 Knowledge of the timing, distribution, and abundance of newly hatched larval fish is helpful in developing an understanding of stream fish ecology. This study investigated the larval fish community in Honey Creek, a tributary to the Sandusky River in Seneca County, Ohio (April-August 2007; total N = 44). Castostomids were the most abundant family of fish collected in the drift, with percids, cyprinids, centrarchids, and ictalurids also present in the stream. Comparisons were made between time of day (day and night) and larval fish density, stream discharge, and turbidity (total suspended solids mg/L). Stream discharge was significantly higher during the day and no difference between day and night samples was observed for total suspended solid concentrations. However, 96.8% of larval fish (total N = 1,328) were collected during the night (22:00-7:00), thus supporting the majority of literature on diel drifting in larval fish communities. Additionally, high proportions of yolk-sac (0.40) and larvae (0.56) were collected. Because high occurrence of early developmental stages of larval fish and significantly higher night densities of larval fish regardless of stream discharge and turbidity were found, the results support the hypothesis that drifting is an active behavior.