Nesting Success of Grassland and Shrub-Nesting Birds on The Wilds, an Ohio Reclaimed Surface Mine 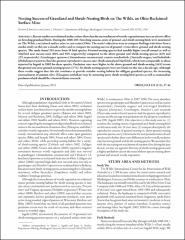 Recent studies on reclaimed surface mines show that the encroachment of woody vegetation may have an adverse effect on breeding grassland birds. During the 2008-2011 breeding seasons, nests of ground- and shrub-nesting birds were monitored on The Wilds, a reclaimed surface mine in east-central Ohio. The study’s objectives were to compare findings with those from a similar study on this site a decade earlier and to compare the nesting success of ground- versus above-ground and shrub-nesting species. The study found 291 nests from 18 bird species. Ground-nesting species had notably higher overall annual as well as Mayfield nest success rates (60% and 55% respectively) compared to the above-ground and shrub-nesting species (42% and 32% respectively). Grasshopper sparrows (Ammodramus savannarum), eastern meadowlarks (Sturnella magna) and bobolinks (Dolichonyx oryzivorus) had the greatest reproductive success rates (both annual and Mayfield), which were comparable to those reported by Ingold in 2002 for these species. Predation rates were higher in the above-ground and shrub-nesting (44%) versus the ground and near-ground nesting species (27%). Six shrub-nesting species were not found on this site a decade ago. Although these results suggest that this site continues to provide suitable nesting habitat for obligate grassland species, the increasing encroachment of autumn olive (Elaeagnus umbellate) may be attracting more shrub-nesting bird species as well as mammalian predators which should be a focus in future research.