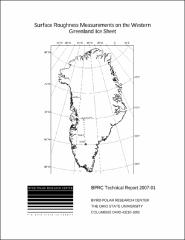 This report summarizes in situ observations of snow surface roughness in relatively benign regions of the western Greenland Ice Sheet. The data were collected in June and August, 1991, June 1992, June 1993 and June 1995. The observations were used to support the interpretation of airborne SAR and laser measurements as well as ERS-1 and JERS-1 spaceborne SAR observations. Surface characterization measurements complemented other, coincident, in situ experiments including C and Ku band surface scatterometer observations, ultra-wideband (operations from 0.5 to 18 GHz) scatterometer measurements, large scale surface topography measured by leveling, and the deployment of radar corner reflectors. This report focuses on snow-surface roughness measurements, both quantitative and anecdotal. Quantitative surface roughness was measured with a large, 1 m long comb gauge and with hand-held comb gauges. Included in the report are qualitative observations of peak-to-peak surface roughness which were frequently commented upon in field notebooks. Also included are numerous photographs. Selecting type areas for measuring roughness was challenging because of the number of surface morphologies distributed in each study areas. A severe limitation of the data is likely to be the short length of the roughness measurements. Sampling length may lead to biased estimates of correlation length. Additional measurements were made of the near surface firn by excavating 1-2 m deep pits. These observations included firn density, grain size, grain shape, temperature, and stratigraphy. 10 m or deeper firn cores were collected from a few sites and analyzed for density, grain size and shape. Surface roughness was frequently measured on ice layers and other inclusions observed in the firn column and some of these data are included for comparison to the snow-surface properties.